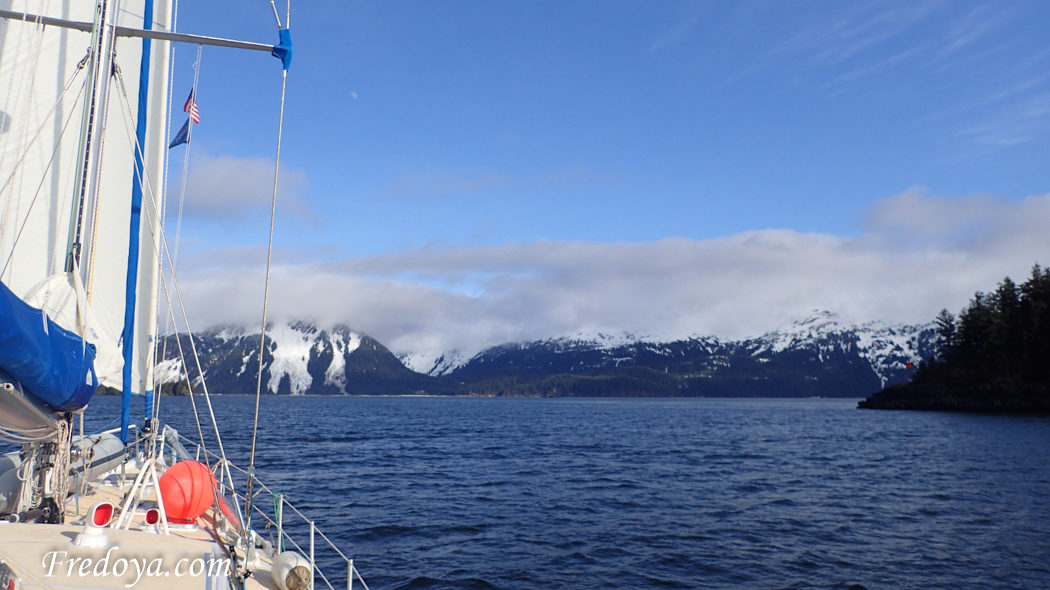 To do our 14 days of quarantine we moved away from the village of Cordova where the messages advising to quarantine did not stop coming from the town hall and on all networks.
Messages mainly concerning people who have travelled the last few days… which was our case!
We returned in extremis from Montreal before the borders closed, not very comfortable when we show our European passport! Even if we’ve stayed on the American continent.

After our trip through 9 airports, we were concerned and we stayed away from all our friends who came to welcome us! They lend us a car to drive by ourselves the 12 miles from the airport to the boat (they were more busy than afraid of being in the same car as us 😉 )
After 2 days in the boat moored on the pontoon, we took off…
Alone in the world with wolves (or more certainly coyotes) howling at night when it is not yet the full moon …
Otters, seals, eagles, ducks (green collars and goldeneyes) but not fish to catch yet, hey are still in hibernation

No real obligation and we can move from one harbour to another, a priori without doing quarantine on arrival … let’s see the evolution …
The stores work by phone and only the supermarkets remain open with limited hours and above all a social distance of 6 feets.

To give you an idea, in the area we must be a group of about 15 sailboats to sail: (thousands of miles)
5 wintered in Cordova (Austrian, German, American, 2 French)
1 in navigation: Fleur Australe , Philippe Poupon sailing to Juneau
4 made the Northwest Passage last summer:
1 in Kodiak, a young Franco-Swiss lucky like us for their visa
3 stored ashore in Sand Point. The crew: French Belgians and Czechs are not ready to be able to enter to get their boat back
1 Swedish in Homer
And in Seward: Imaqa (Fredoya’s sister-ship) who would like to return to Europe by the Northwest Passage next summer.

The virus appeared in northern Alaska – Anchorage and spread to 1 or 2 villages and this is not surprising since everyone travels by plane here (no road to go to Cordova nor ferry) and during the winter period there is a flow North / South (mainly through Seattle airport where we were beginning of March!)
Salmon fishing is one of the main occupation of the entire population from mid May to mid September. It pays enough to take advantage of life and travel to warm countries (mainly Mexico, Colombia) during winter.
For this year, big concern because the first boats that went out for the King Crab don’t knoew how to sell them and processing plants (canneries) closing one after the other.
In addition, the workforce of these “canneries” is mainly Mexican with seasonal contract and this year the big question will be of how to manage it  if they can’t come.
They still have one & half month before the opening of the fishing season but it will be complicated.
The authorities are in the process of setting up contracts with responsibility for employers to control their crew with quarantine … etc … to follow …

Our Austrian friends for whom we came to meet last fall, have their visa ending in early May.
Phone calls to the authorities: the US customs tell them that they must leave and no country wants them inside thier borders, even if they promise to remain in quarantine on arrival and that they have not left Cordova for 5 months – Alaska for 1 year !!!
We keep ourselves informed through the different networks arriving in dotted lines at the far end of the fjord. We have the news headlines for lack of depressing details !
The children are all doing well and we cross our fingers so that they (the 2 grown-ups and their Co) stay safe and sane with work office in their respective small apartments if they can no longer go out to run once a day …
The youngest is in the countryside and stays inside the authorized perimeter which will greatly reduce her miles average of nomadism.
We are lucky with sailing-life to have all been used to being confined during crossings, sometimes very long … but it’s always easier when we can say that we choose it …

We have more time for maintenance than expected and fortunately we had made the gear supply in advance for an earlier season with customers… because the deliveries already required a good dose of patience here….
I even started sewing to change the seat covers of the living room…. May say that time benefits us …
The water-maker is almost assembled but we will wait for warmer water to test it and especially to really need it (there was still some ice on the surface this morning)

2 days ago, we discovered a leak in the cooling exchange of the inverter : forward/reverse ( … so we decided to return to the harbour to have the fittings adapted to a “spare” that we had in anticipation of the Passage from the North West, this will avoid odd job between the different pipe diameters…
Arriving in the harbour in time, no more oil seems to be in the gearbox so no more inverter, few maintenance, endless list!